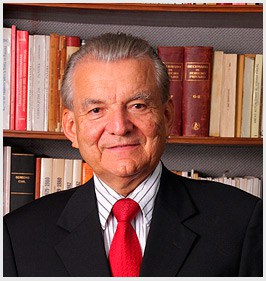 Extensive experience in civil , commercial, corporate , administrative, labor, banking law . You are responsible for the management of the firm Solis, Endara, Delgado and Guervara since 1989, which he joined as a partner in 1966. Founder of a number of foundations, professional organizations at national and international level and adviser and manager commercial and industrial, and media companies.

President of the National Bar Association for two terms; creator of the Act governing law in Panama, currently promoting the constitutional reform of 1983, which assigned a percentage of the budget of state revenues for the judiciary which has no history and remains in force; Council member who organized the first congress of the Bar of Ibero-American countries in Panama in 1982, former Member of the Executive Council of the American Bar Association (FIA), Founder of labor organizations such as the Federation of Professional Associations of Panama (FEDAP ), National Association of Journalists; Founder of the Latin American Union of Lawyers (ULDA).

Founder of a number of foundations, professional organizations at national and international level and advisor and manager of commercial and industrial enterprises, and social media, many of which besides being its founder, is part of its share capital stock.