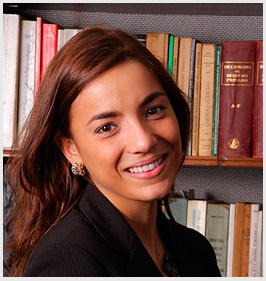 Ana Delgado practises law in SOLENDEG on the various disciplines of public and private law, such as commercial, banking, insurance, corporate, trusts, labour, immigration, civil administrative and procedural law. Delgado is also qualified as a public translator since 2004.

Delgado is a member of the Editorial Board of the Journal of Law and International Policy (Journal of International Law and Politics). John Vogelstein Scholar (2005-2006), New York University, Pollack Centre for Law and Business. Certificate of Merit awarded by Georgetown University Competition Philip C. Jessup International Law Moot Court Competition (2002). She was recently accepted by the Universities of Stanford and Georgetown. She holds finance and law studies from the University of Delaware and Beaver College in Philadelphia.
Delgado was Panama Ambassador to the United Kingdom of Great Britain and Northern Ireland from 2011 until 2014. She was also Panama Ambassador to Ireland, Iceland and Norway and Panama Permanent Representative to the International Maritime Organization as well as Panama General Consul in London. Delgado was also member of the Board of World Maritime University in Malmo, Sweden and she is Vice President of International Maritime Organization (IMO) Assembly.